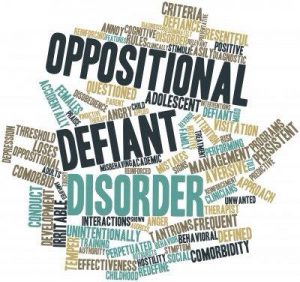 Oppositional Defiant Disorder and characteristics of the disorder will be seen in most children at some stage of their development. It becomes a problem when the criteria do not resolve naturally and problems intensify.

Oppositional Defiant Disorder and characteristics of the disorder will be seen in most children at some stage of their development. It becomes a problem when the criteria do not resolve naturally and problems intensify.

If your child has been diagnosed with ODD it means they exhibit the majority or at least four of the following criteria under the Diagnostic and Statistical Manual of Mental Health Disorders for at least six months:

As I said, I am sure you have seen parts of the criteria in your child at some stage and this is normal. It becomes a problem when it doesn’t stop.

One client I worked was a 12 year old boy where his parents had recently divorced. He continually played each parent off against each other, which is a typical problem faced by many parents even without ODD thrown in the mix. He would not comply with any instruction and had an answer for everything, would destroy his other siblings property, blame everything on his parents and sibling leaving both parents at a loss to know what to do.

Divorce and separation often creates huge tension and chaos in children’s lives and this is where the parents need to set aside their differences for the sake of their child as in this case the child was seeking structure so he had to make his own by controlling the situation. The following steps are not easy and you as a parent need to work on knowing the focus must be on your child.

Many parents are scared and frightened to seek help for their child for fear of criticism of their parenting, but as I say to my parents you are not given a handout on what parenting is meant to be. There are many types of parenting and all have a valid place. Getting an outside perspective gives you the strategies to apply in your homes to make your child’s world a better place, not just for them but for your whole family.

We are currently doing telehealth sessions

To help through the Covid-19  time and beyond